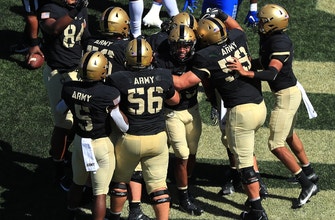 In Army’s first Week 1 shutout since 1993, the defense was stout and the running game was as strong as ever. The Black Knights ran for 340 yards and scored all five offensive touchdowns rushing. Sandon McCoy led the way with three scores. Jon Rhattigan also led the defense with a pick six in the second half.