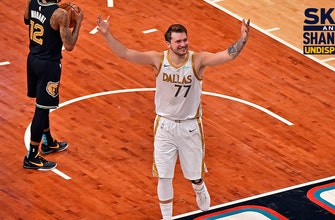 Even during an eventful night of impressive NBA performances, Luka Doncic still stole the show. With one point eight seconds left and the Dallas Mavericks down two to the Memphis Grizzlies, Luka received the inbounds pass before splitting a double team, stumbling and somehow getting the shot off and draining it. After the game, Luka was pretty honest saying he was surprised when it went in considering he didn’t see the rim when he released it, and he called it quote, ‘kinda lucky.’ Hear what Skip Bayless and Shannon Sharpe have to say about Luka’s lucky shot.