Home › News › Dodgers explode for five runs in the 12th to defeat Padres, 11-6, in instant classic

Dodgers explode for five runs in the 12th to defeat Padres, 11-6, in instant classic 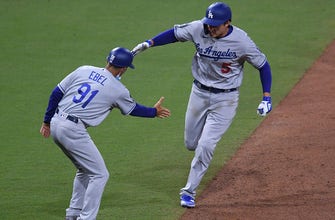 In one of the best games of the young season, the Los Angeles Dodgers drove in five runs in the top of the 12th inning and defeated the San Diego Padres, 11-6. Corey Seager hit the go-ahead two-run homer in the 12th.