Home › News › Torrey Smith: It’s ‘all or nothing’ for Jalen Hurts in Philadelphia this season I SPEAK FOR YOURSELF

Torrey Smith: It’s ‘all or nothing’ for Jalen Hurts in Philadelphia this season I SPEAK FOR YOURSELF 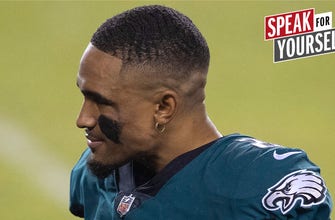 Jalen Hurts is expected to be the Philadelphia Eagles’ starting quarterback next season. However, there have been recent rumors that the Eagles could trade up in the NFL Draft to select a quarterback. NBC Sports’ Peter King thinks Hurts can be the long-term starter, saying quote ‘I think the Eagles desperately want him to win this job.’ He also adds that the Eagles want him to play well so they can utilize their draft picks to build a great team. Torrey Smith explains why it is ‘all or nothing’ for the young quarterback this season.