Home › News › Emmanuel Acho: Aaron Rodgers won’t be in Green Bay; he fell out of love with the Packers I SPEAK FOR YOURSELF

Emmanuel Acho: Aaron Rodgers won’t be in Green Bay; he fell out of love with the Packers I SPEAK FOR YOURSELF 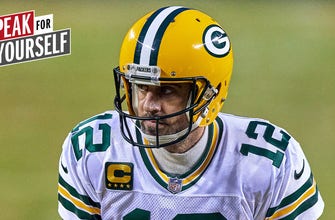 Recent reports within the last few months said that the Green Bay Packers offered Aaron Rodgers a long-term extension that would make him the highest-paid quarterback in the NFL. However, he turned it down. Another report said he spoke to several players about joining him somewhere else. Hear why Emmanuel Acho believes that the reigning MVP will end up leaving Green Bay.

Like Loading...
‹ Google is helping the England soccer manager pick his squad. Here’s how
Seven Yankees coaches, staff have COVID-19, Gleyber Torres out as precaution ›