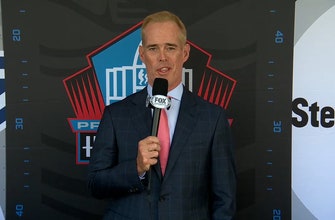 Joe Buck received the prestigious Pro Football Hall of Fame’s Pete Rozelle Award for “longtime exceptional contributions to radio and television in professional football. Joe joined his father, Jack Buck, in receiving the award and became the first father-son duo to do it.