Home › News › Joy Taylor on Ben Simmons drama: Both himself and the 76ers are to blame for this predicament I SPEAK FOR YOURSELF

Joy Taylor on Ben Simmons drama: Both himself and the 76ers are to blame for this predicament I SPEAK FOR YOURSELF 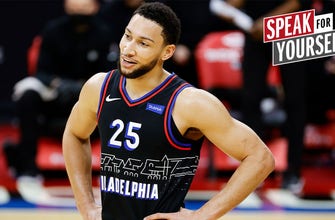 The drama continues in Philadelphia, where 76ers’ head coach Doc Rivers threw Ben Simmons out of practice today and the team has suspended him for one game for quote: ‘detrimental conduct to the team.’ Simmons’ reluctance to engage with the team has been a theme since his return. Rivers said quote: ‘We told him to go home, but hopefully at some point, he wants to be here.’ Joel Embiid followed up, saying quote: ‘At this point, I don’t care about that man honestly. He does whatever he wants..at the end of the day, our job is not to babysit somebody…’ Joy Taylor discusses what the 76ers should do about Simmons and explains why it should be approached similarly to the Brooklyn Nets – Kyrie Irving situation.