Home › News › LaVar Arrington: Defenses are figuring out how to play against Lamar Jackson I FIRST THINGS FIRST

LaVar Arrington: Defenses are figuring out how to play against Lamar Jackson I FIRST THINGS FIRST 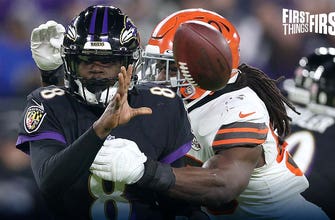 After another loss for the Baltimore Ravens, LaVar Arrington joins First Things First to talk about Lamar Jackson. Pittsburgh Steelers’ safety Minkah Fitzpatrick said he doesn’t think anybody will ever be able to figure Lamar out, and while LaVar is inclined to agree, he thinks defenses are at least figuring out how to play against the Ravens’ offense. Plus, Nick Wright lays out why Lamar is having the worst year of his career.