Home › News › Emmanuel Acho: ‘Curry changed the way basketball is played, therefore the comparison is reasonable | SPEAK FOR YOURSELF

Emmanuel Acho: ‘Curry changed the way basketball is played, therefore the comparison is reasonable | SPEAK FOR YOURSELF 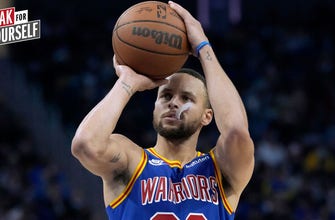 The Golden State Warriors are scheduled to take on the Portland Trail Blazers Wednesday night. Ahead of the matchup between the two Western Conference foes, Warriors head coach Steve Kerr was quoted saying ‘I think Steph in a lot of ways is like Michael Jordan.’ Kerr a former teammate of Jordan won a championship with the Bulls in 1997 as a player and won three as Warriors head coach. Emmanuel Acho on if it is ‘crazy’ to compare Michael Jordan to Stephen Curry.