Home › News › Emmanuel Acho: The Rams are a SB team because they look like other championship-caliber teams I SPEAK FOR YOURSELF

Emmanuel Acho: The Rams are a SB team because they look like other championship-caliber teams I SPEAK FOR YOURSELF 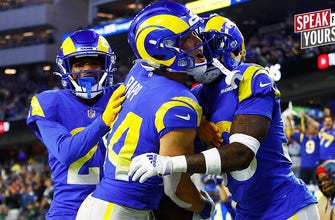 The Los Angeles Rams’ offense started off slow against the Seattle Seahawks, but picked it up in the second half. Matthew Stafford connected with Cooper Kupp for two touchdowns and the Rams sealed the victory against their NFC West division rivals. The Rams have won three straight games and are tied with the Arizona Cardinals for first place in the NFC West. Emmanuel Acho breaks down why he is convinced the Rams are a Super Bowl team.

Like Loading...
‹ Here’s where the NBA’s business stands as it enters a critical phase of its season on Christmas
NHL announces players will not participate in 2022 Beijing Olympics ›