Home › News › Joel Klatt: Alabama will be the no. 1 team in the country heading into next season I SPEAK FOR YOURSELF

Joel Klatt: Alabama will be the no. 1 team in the country heading into next season I SPEAK FOR YOURSELF 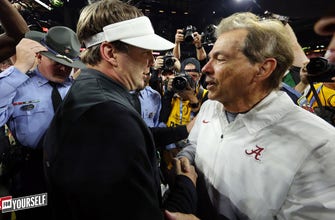 The Georgia Bulldogs defeated the Alabama Crimson Tide 33-18 in the College Football Playoff Championship Game. This marks the SEC’s second straight National Title win, their fifth in the last seven years and Georgia’s first in 41 years. Joel Klatt talks about the CFP National Championship game and what he noticed during the postgame exchange between Kirby Smart and his former boss Nick Saban.