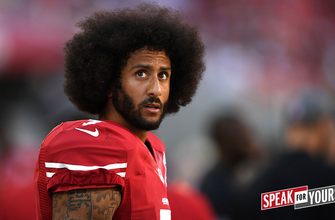 Colin Kaepernick made the news Friday after posting a video of him working out and throwing passes with the caption ’still working.’ Kaepernick has since caught the attention of Seattle Seahawks WR Tyler Lockett, who offered to run routes & catch passes from Kap. Lockett accepting the offer is significant because the Seahawks were the only team to bring in Kap for a workout in 2017. Kaepernick last played in the 2016 NFL season where he went 1-10 in his 11 starts for the San Francisco 49ers. Emmanuel Acho decides if Kaepernick has a legit chance to make a comeback.