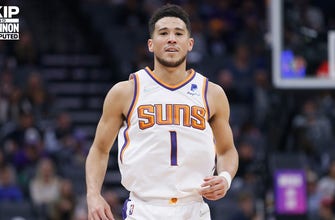 The Phoenix Suns beat the Denver Nuggets last night 140-130. Devin Booker had 49 points and 10 assists, leading his coach Monty Williams to say quote: ‘the fact that he’s not in the MVP conversation is just somewhat silly.’ He also caught the eye of Brooklyn Nets guard Kyrie Irving as he tweeted quote: ‘MVP– AT DEVIN BOOK,’ tagging the Suns’ shooting guard in a Twitter post. Shannon Sharpe explains why Booker ‘deserves’ an MVP case.

Like Loading...
‹ Did the Panthers make the right moves at the NHL trade deadline?
Saudi Arabian Grand Prix: F1 drivers agree to race despite security concerns after missile attack ›