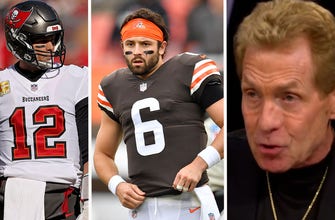 After requesting a trade from the Cleveland Browns, Baker Mayfield is still without a new home. Despite Tom Brady coming out of retirement, the Tampa Bay Buccaneers have been linked as a possible destination for the former Heisman winner. When asked about the possibility of adding Baker as a backup, Bucs General manager Jason Licht said quote: ‘I don’t want to talk about a player that’s on another team’s roster right now, but we may still add a veteran quarterback. We’re going to have to see how it goes here.’ Skip Bayless explains why this move could be a helpful move for Baker if he settled as a backup quarterback.

Like Loading...
‹ Tom Brady is reportedly “working on” a trade from Bucs, could land with Dolphins I UNDISPUTED
NHL Rink Wrap: 5 assists for Gaudreau; Fleury wins Minnesota debut ›