Home › News › Did Tom Brady have a hand in Bruce Arians’ move to front office? I UNDISPUTED

Did Tom Brady have a hand in Bruce Arians’ move to front office? I UNDISPUTED 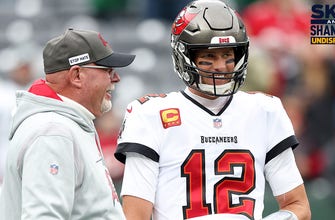 There’s a new era in Tampa Bay. Just a few weeks after Tom Brady announced his “un-retirement,” the Hall of Fame quarterback’s head coach, Bruce Arians, has decided to walk away from coaching. Arians will move aside into a front office role which allows defensive coordinator Todd Bowles to step in as the new head man in Tampa. Reports say that Bowles is finalizing a new five-year deal with the Bucs. Shannon Sharpe explains why this move had ‘99.9 percent’ to do with TB12.

Like Loading...
‹ Trey Lance should not be 49ers starting QB next year I SPEAK FOR YOURSELF
The Small Sports Blog’s MLB Picks – 3/31/22 ›