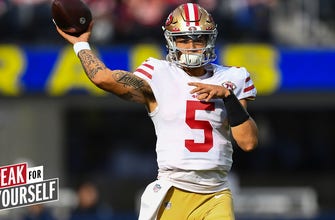 The San Francisco 49ers are figuring out their quarterback situation. Kyle Shanahan says that not being able to trade Jimmy Garoppolo does not change any plans in handing the reins over to Trey Lance, saying quote: ‘We brought Trey here to be that guy eventually and I think that will be sooner than later.’ Marcellus Wiley explains why Lance should not be the 49ers’ starting quarterback.