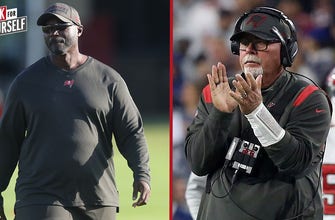 Bruce Arians announced that he is retiring from coaching and moving to the Tampa Bay Buccaneers’ front office. Defensive coordinator Todd Bowles will succeed Arians’ former role as head coach and is expected to sign a five-year deal. Emmanuel Acho explains why he like Arians’ succession plan for Bowles.

Like Loading...
‹ Manchester City v Atletico Madrid: Pep Guardiola hits back at ‘overthinking’ claim
‘There are so many ways to lose money.’ Advice for college athletes from former basketball player turned financial advisor ›